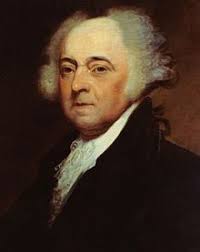 Having lived (and re-lived) George Washington’s life, we now move ahead to one of America’s most important but less well-understood presidents: John Adams. David McCullough’s 2001 book “John Adams” and the later HBO mini-series of the same name dramatically increased awareness of Adams’ role in the founding of our country, but for many he remains an elusive and enigmatic figure.

He was born in Braintree (now Quincy), MA and during his 90 years of life managed to accomplish a staggering amount: he was a lawyer, a statesman, a diplomat,  an author, a Founding Father, served as Vice President for two terms and was President for one term.  He was also a proud father and very devoted husband.

Adams was Harvard-educated (my alma mater, Brown University, wasn’t yet established so he is forgiven for having not applied), he was father to a future president and was a second cousin of Samuel Adams.  Despite what you may be thinking, Samuel Adams did not found a beer company brewing a beer bearing his name.  That was Jim Koch and two friends nearly two centuries after the American patriot’s death. But we digress…

John Adams died in 1826 on the 50th anniversary of the of the adoption of the Declaration of Independence in Quincy, MA, very near where he was born.  If you are a fan of presidential history, you are already familiar with the odd coincidence that Adams and Thomas Jefferson (who defeated him for the presidency in 1800 for what would have been Adams’ second term) died within hours of each other.

I admit to knowing relatively little about our second president, but am ready to begin reading the eight biographies on my bookshelf (including a pair belonging to Page Smith’s two-volume series published in 1962).  Never having seen the HBO miniseries, most of what I know about John Adams is a result of my reading about George Washington’s life six times over the past couple of months.  And based on that osmosis alone, the brilliant but crusty New Englander should prove quite interesting.

In contrast to my strategy with Washington where I began with Flexner’s mature but groundbreaking series, I’m not going to start with Page Smith’s half-century-old pair.  Although it is a relatively early, and seemingly quite thorough, work on Adams’ life and may be an appropriate place to start, I’m going to begin eating this cake with what is apparently the icing: “John Adams” by David McCullough.

Then, once I’ve witnessed for myself what all the McCullough-fuss is about, I will move on to Smith’s two-volume series and then proceed chronologically through my collection which includes biographies by John Ferling, James Grant and Joseph Ellis, with the most recent biography clocking in at barely two years old.