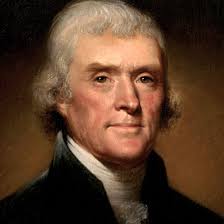 Having finished reading the seven books I own on John Adams it’s finally time to move to our third president: Thomas Jefferson.

In some ways even more enigmatic and complex than John Adams (if that’s possible), Jefferson is widely viewed as one of our best presidents, but also one of the most difficult to truly get to know.

On average, he ranks fourth in terms of popularity as a “great” president in the dozen or so surveys I have collected, just behind Lincoln, FDR and Washington…and well ahead of poor John Adams (who ranks twelfth on average by my math).

Not only has Jefferson attracted a large number of fans (and biographers), but he has also generated a great deal of controversy – concerning his presumed relationship(s) with his slaves, his duplicitous nature (revealed partially in his extensive correspondence with Adams) and his views toward organized religion (apparently Calvinism and the Catholic Church in particular).

But until I’ve marched somewhat through my 18″ high stack of biographies on Jefferson, he remains largely an unpainted canvass for me – other than the fact I know him to be the principal author of the Declaration of Independence, a diplomat, a Secretary of State, a Vice President, a two-term President, a slave owner, the mastermind behind Monticello and founder of the highly regarded University of Virginia (which, as a Virginia resident, I am hopeful my kids will one day attend).

First up is preeminent Jefferson biographer Dumas Malone’s six-volume Pulitzer-prize winning  “Jefferson and His Time”.  Written between 1948 and 1981, Malone’s biography of Jefferson promises to be for Jefferson what Flexner was for Washington and Page Smith was for John Adams.  Many biographies have been written since Malone’s monumental effort, but as far as I can tell, none have surpassed his work.

Next will be Merrill Peterson’s weighty biography “Thomas Jefferson and the New Nation”.  This seems to be generally considered the “best” single-volume biography of Jefferson.  Published in 1970, Peterson apparently considered this his finest work.

Finishing off my tour through Jefferson will be “American Sphinx” by Joseph Ellis, “Twilight at Monticello” by Alan Pell Crawford and Jon Meacham’s recent “Thomas Jefferson: The Art of Power”.  There are several others I would like to read (given the controversy they generated, if nothing else) but time is short and I’ve still got another 65,000 pages or so to get through before my eyesight fails.

In addition to learning more about Jefferson, I’m particularly interested to see whether any of the more recent Jefferson biographies on my list can stand up to Malone’s original masterpiece. We’ll see…

7 thoughts on “Next Up: Thomas Jefferson!”