James Monroe was the first of the earliest presidents to capture the presidency without an obvious tailwind assisting his efforts. He was a college drop-out and Revolutionary War veteran who was never able to achieve a command he believed equal to his talents. And, like some modern-day presidents, he was not particularly intellectually gifted or a natural leader.

But he was hard working, likable and a bit scrappy.  He carefully cultivated personal relationships throughout his life, and along the way he gained some valuable mentors and friends.  Among these were Thomas Jefferson, James Madison and John Marshall.

During his four decades of public service, Monroe served in the Virginia House of Delegates, on the Virginia Governor’s Council, as a Delegate to the Continental Congress, as a U.S. Senator, Minister to France, Governor of Virginia, as special Envoy to France, Minister to Britain, Secretary of State, Secretary of War and, finally, as a two-term President of the United States.

Yet very few Americans are familiar with Monroe or anything he did prior to his presidency.  Forced to identify any of Monroe’s presidential accomplishments before I began this biographical journey, all I could conjure up was the Monroe Doctrine…

Biographers seem equally detached from Monroe and his legacy; only a modest number of books focused on Monroe have been published.  And few of those seem to have been read by more than just the author’s “friends and family.” For the purpose of my quest, I read the two most popular (but thorough) biographies of Monroe I could find. 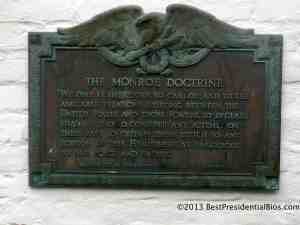 * Harry Ammon’s “James Monroe: The Quest for National Identity” was written over forty years ago and remains the standard Monroe biography for interested scholars and aspiring presidential historians. Unfortunately for the latter, it seems to have been written not to entertain, but primarily to inform. And in an effort to avoid injecting bias into the text, the author diligently avoids passing along the insightful opinions he undoubtedly formed while conducting research for this book.

The reader also fails to learn much about the personal side of Monroe; he is never fully humanized and seems two-dimensional.  But otherwise the book is a thorough and informative review of Monroe’s life. (Full review here)

* Harlow Unger’s “The Last Founding Father: James Monroe” was written much more recently and provides a more colorful glimpse into Monroe’s life. This biography is more more rapidly paced and easily read than Ammon’s. Unger’s biography of Monroe also features more (many more) of its author’s opinions. This proves to be both a fundamental strength and a critical weakness of the book.

The author’s provocative, against-the-grain statements are often interesting to read but many seem almost outrageous when seriously considered (Adams, Jefferson and Madison were merely caretaker presidents?) Fortunately, these claims are easy to spot and consider critically. But how many opinions were more subtly disguised as fact?  In the end, this was a more entertaining biography than Ammon’s, but left me with the feeling I had read the biography Monroe would have written of himself rather than the book an objective historian would have authored. (Full review)

* The first comprehensive biography of James Monroe’s in over a decade was published this week – so I jumped at the chance to read and review it immediately.  Tim McGrath’s “James Monroe: A Life” is delightfully thorough – the longest of the three Monroe biographies I’ve now read – and is commendable in many respects. But it does not break away from the pack.

In many ways it reads like two different books: one focused on Monroe’s early life (which, for me, was relatively dense, dull, disjointed and disappointing) and one focused on his service as a US senator, governor, diplomat and president (which proved far more engaging, insightful and enjoyable). In a perfect world, I suppose, readers would absorb Monroe’s early life from Ammon or Unger and then re-live Monroe’s political career through the eyes of McGrath.  (Full review here)

Most Recent Biography of Monroe: “James Monroe: A Life” by Tim McGrath

25 thoughts on “The Best Biographies of James Monroe”

“For all he had done to get there, Tip O’Neill hated Congress.”