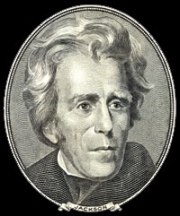 Nine months have passed since I began this journey, and six presidents are now in the rear-view mirror.  That’s 36 biographies and over 17,000 pages of life, death, conflict, controversy and adventure.  Happily it has been more interesting than I anticipated.

Now we’re leaving behind the east coast “elites” – at least temporarily – and heading west to meet our next president.  Compared to the semi-aristocrats from Virginia and the pious father-and-son pair from Massachusetts who preceded him, frontiersman Andrew Jackson certainly enjoyed a less genteel upbringing.

Based on the glimpses of him provided by the biographies of his predecessors, Jackson reminds me more of Wyatt Earp or Doc Holliday than John Adams or James Madison.  And only one hundred or so pages into my first Jackson biography, it already seems that his remote, hardscrabble upbringing forged Jackson into a larger-than-life caricature of the traditional soldier-statesman – something like Daniel Boone meets John Adams meets Genghis Khan.

But I have much, much more to learn of our seventh president (I know little more than his name, that he is featured on the US $20 bill and that his favorite means of dispute resolution was the duel).  Fortunately, eight books on Andrew Jackson sit on my shelves – three of which are Pulitzer Prize winners. And this will be my first time reading four of these authors.

My plan of attack is to start with the oldest book, “The Life of Andrew Jackson” by Marquis James, which was published in 1938 and won a Pulitzer Prize in the Biography category.  Next up will be “The Age of Jackson” by Arthur Schlesinger which won a Pulitzer in 1946 in the History category.

The next four books are by Robert Remini: his well-liked three-volume biography of Andrew Jackson and his equally acclaimed, but more widely read, single-volume abridgment.  Wrapping up Andrew Jackson will be “Andrew Jackson: His Life and Times” by H.W. Brands and Jon Meacham’s 2009 Pulitzer Prize winning “American Lion.”

This should be interesting…!