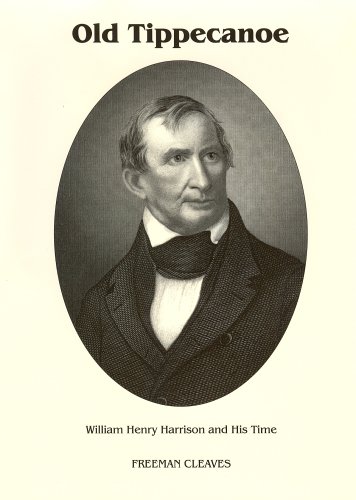 “Old Tippecanoe: William Henry Harrison and His Time” by Freeman Cleaves was published in 1939 and remains the “go to” classic on the nation’s ninth president. Born in 1904, Cleaves graduated from the University of New Hampshire and worked as a journalist beginning in 1925.  His career included stints at The Boston Herald, The New York Times and The Wall Street Journal.

Despite this biography’s age, it remains quite readable and surprisingly animated. And Harrison, notwithstanding his brief and unremarkable presidency, proves a more interesting character than I had expected.  And although they often occupied different ends of the political spectrum, Harrison seems a bit like Indiana’s answer to Andrew Jackson: a frontiersman, local politician and a man drawn to the military who found himself constantly battling Indians.

Most of the first two-thirds of the book focuses on Harrison’s “adventures” with Indians on the northwestern frontier – as an army officer, secretary of the Northwest Territory and Governor of Indiana.  Although Cleaves’s description of various Indian encounters (including the famous Battle of Tippecanoe) is captivating, at times it feels as though you are reading the journal of someone following Harrison around the woods: you come away with a good sense of the various confrontations but with little context for what is happening outside Harrison’s “bubble.”

Less enthralling, but more intellectually satisfying, are the chapters describing Harrison’s run for the presidency in 1836 (an election he lost to Martin Van Buren) and his subsequent, successful, run in 1840.  It is here that one gets the truest sense for Harrison’s personality and inner-self.  Otherwise, the biography presents relatively little of his innermost thoughts or his family life, apart from sporadic updates on the whereabouts of his ten children.

Harrison’s presidency, which lasted barely a month, is hardly described although Cleaves does a nice job describing the political calculus behind Harrison’s cabinet picks. But by now, on my forty-seventh presidential biography, I have grown used to sentimental and poignant presidential deaths. Cleaves provides no such heartrending moment for Harrison who disappears in barely a paragraph.  Nor does he provide any suggestion of what a more long-lasting Harrison presidency might have meant for the nation – a particularly stark omission in my view.

Overall, Freeman Cleave’s biography of William Henry Harrison is fine, but not great. It informs and educates but does not fully satisfy (much less thrill) the curious reader. And in the end Harrison remains almost as much an enigma as ever. This biography provides insight into his background and his path to the presidency, but too little about him personally to allow the reader to develop a sense of familiarity with Harrison, to understand his core, or to hypothesize where a longer Harrison presidency might have taken the country. “Old Tippecanoe” is a useful biography of William Henry Harrison, and surprisingly readable for a book twice my age, but left me feeling less satisfied than I had hoped.

5 thoughts on “Review of “Old Tippecanoe” by Freeman Cleaves”