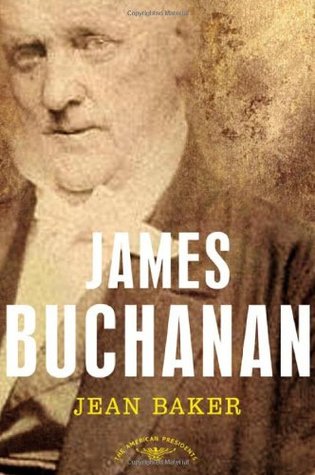 “James Buchanan“ is Jean Baker’s 2004 addition to The American Presidents Series.  Baker is a history professor at Goucher College in Maryland where she previously received an undergraduate degree. She earned a Masters and PhD at Johns Hopkins and has written several books, the best known being “Mary Todd Lincoln: A Biography.”

As the fifth book from The American Presidents Series I’ve read so far, “James Buchanan” meets or exceeds most of my expectations for members of this series: it is concise, deliberate, extremely accessible and very time-efficient. In addition, the storyline is consistently clear and important themes never get lost in a sea of unwanted detail.

Unfortunately, Baker’s strong negative opinion of her subject eventually detracts from what would have otherwise been a more compelling biography. While the author has every right to critically examine Buchanan’s presidential performance, her criticism often feels mean-spirited and personal. Rather than simply being tough-but-fair she needlessly overplays her hand.

In stark contrast to Philip Klein’s detailed study of Buchanan four decades earlier (where the topic received barely a mention), Baker spends an excessive amount of time pondering Buchanan’s sexuality and reflecting on his choice to remain a lifelong bachelor. Baker eventually draws a connection between Buchanan’s lifestyle preferences and his failure to succeed in the White House, but the linkage appears tenuous at best.

The best aspect of the book (other than its brevity and ability to hold my interest) is probably its final chapter. Here, Baker ponders Buchanan’s legacy and examines his failure to excel at a job for which he seemed so well prepared. Although the author’s analysis seems inequitable and unbalanced, I always appreciate an effort to explicitly assess a president’s effectiveness and diagnose success or failure.

To her credit, Jean Baker has written an interesting and informative biography about an unpopular and obscure president. Her biography of James Buchanan is lively, fast-flowing, entertaining and easy to read. But while she articulately and passionately shares her perspectives of Buchanan, the book lacks needed balance. Not intended for a serious Buchanan scholar (who would find it superficial and light on original research), this biography seems ideal for someone interested in learning about one of our least successful presidents as painlessly as possible.

3 thoughts on “Review of “James Buchanan” by Jean Baker”