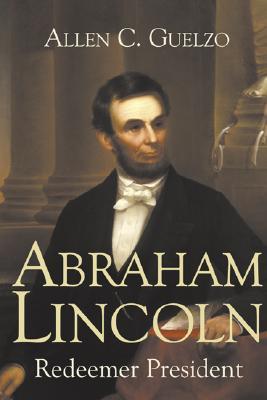 “Abraham Lincoln: Redeemer President” is Allen Guelzo’s 1999 biography of Abraham Lincoln which was awarded the 2000 Lincoln Prize. Guelzo is a Professor and Director of Civil War Era studies at Gettysburg College. He is the author of over a dozen books, most of which are focused on Abraham Lincoln or other aspects of the Civil War.

Often described as an “intellectual biography” Guelzo’s book is certainly not a traditional review of Lincoln’s life. Rather than colorfully tracing Lincoln’s path from birth to death and examining the forces that shaped his life and character, the author sets a different tone by beginning the book with a lengthy political and philosophical treatise.

Subsequent chapters walk through his life, generally chronologically, but with frequent philosophical side-trips to discuss Lincoln’s worldview (including his religious views, his perspective toward slavery, and his political tenets). Although the timeline is never as clear in “Redeemer President” as in other biographies, Guelzo does a better job providing broad political context for Lincoln’s youth and rise in Illinois (and national) politics.

Unfortunately, the author’s writing style resembles that of a professor and not of a novelist; the text is filled with erudite but arduous passages which must be read twice to be fully understood. While many biographies are both entertaining and informative, Guelzo’s tends heavily toward a dry, academic and taxing style.

Readers who are able to move slowly through the book and drink in sips, not gulps, will find intellectual treasures among its pages. But those determined to move at a steady pace with consistent forward progress will find the book frustrating and often inaccessible. Even the most patient reader will find the flow uneven and demanding.

As might be expected of a biography of this type, there is little focus on Lincoln’s family life or his relationships with his friends or advisers. Guelzo does not tell a dramatic story of Lincoln’s self-education or his improbable political rise as do other authors, nor does he closely follow the arc of the Civil War during Lincoln’s presidency. Instead, Guelzo leaves traditional biographical principles to others and focuses on his investigation and analysis of the intellectual, philosophical and moral underpinnings of Lincoln’s character.

As a result, “Redeemer President” is not helpful in following Lincoln’s day-to-day life, in understanding the fascinating backstory to his presidential nomination, or in following Lincoln’s interactions with his Cabinet. The Lincoln-Douglas debates are very interestingly probed but far too rapidly dispatched. And only two pages are required to bridge the months between Lincoln’s nomination for the presidency and his election.

On the other hand, Guelzo’s epilogue is one of the very best concluding sections of any presidential biography I’ve ever read. In two-dozen beautifully written pages he distills the most valuable essence of the preceding four-hundred pages, organizing his thoughts so articulately and comprehensibly that I decided to read it twice – not for clarity, but out of contentment. If only the entire book had been similarly written.

Overall, Allen Guelzo’s “Abraham Lincoln: Redeemer President” is an intellectual biography of Lincoln about which I am unabashedly ambivalent. The author tackles deep philosophical issues worth exploring, but conveys them in a style that is likely to appeal only to an academic audience. Missing from the book is a seamless thread which follows Lincoln’s life from beginning to end in a rich, vibrant and entertaining manner. To be sure, Guelzo offers the tenacious and prepared reader a bounty of wisdom and insight, but “Redeemer President” is unlikely to appeal to a broad audience seeking a traditional biography of Abraham Lincoln.