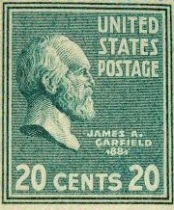 Who would have guessed that a president of so little fame and so brief a tenure in the White House would prove such an interesting biographical subject?

Despite what I perceived to be long odds, each of the three biographies of James Garfield I read were both interesting and meritorious. And one of them is among the most popular three or four books on any president at the moment.

Somewhat in the spirit of Abraham Lincoln, Garfield was born into poverty and worked diligently to better himself through education. But where Lincoln heard the clarion call of the legal profession, Garfield was drawn to teaching and, soon, the Union army. Both Lincoln and Garfield were drawn into national politics in mid-life, and both of their presidencies were cut short by a madman’s bullet.

Lincoln’s presidency witnessed the entirety of the Civil War before an assassin ended his second term as president. But James Garfield barely had time to appoint a cabinet and vanquish a power-hungry Republican rival before being shot just months into his first term.

I was surprised and delighted to find the story of this 200-day president so interesting. And I found myself wondering what might have been had he lived. Several generations of historians have pondered the same.

*The first biography I read was “Dark Horse: the Surprise Election and Political Murder of President James A. Garfield” by Kenneth Ackerman. Published in 2003, this book proves to be a political thriller almost exclusively focused on the last sixteen months of Garfield’s life.

Ackerman’s account of the 1880 Republican National Convention in Chicago is absolutely captivating and the book’s pace rarely slows during its 453 pages. His accounting of the bitter political rivalry between fellow Republicans James Blaine and Roscoe Conkling is terrific. And it sets the stage perfectly for Ackerman’s description of the power struggle which later erupted between President Garfield and Senator Conkling.

As a presidential biography this book’s key weakness is its lack of coverage of most of Garfield’s life. And although it is tempting to assume that not much of consequence happened during his first forty-eight years, that is hardly the case. Nonetheless, this is an incredibly compelling narrative that will thrill all but the most hard-core of historians. (Full review here)

*The second biography I read was “Garfield: A Biography” by Allan Peskin. Published in 1978, this was the first comprehensive biography of Garfield in four decades and was published just weeks before Margaret Leech’s biography “The Garfield Orbit” (which was completed after her death and is on my follow-up list).

In many ways, Peskin’s biography of Garfield typifies the perfect presidential biography. It is comprehensive, provides penetrating insight into its subject and proves informative without becoming dull or tedious. Despite its age it is easy to read and digest.

Its key flaws are a relative lack of focus on Garfield’s personal life (which leaves him more two-dimensional than he deserves) and a failure to provide more historical context. Often Peskin is so focused on Garfield’s “bubble” that national events of great importance are not articulated. But overall, Peskin’s “Garfield: A Biography” is excellent. (Full review here)

*The last biography of Garfield I read was “Destiny of the Republic: A Tale of Madness, Medicine and the Murder of a President” by Candice Millard. Published in 2011, this popular narrative currently ranks as one of the most popular books of any kind on any president. Though it falls somewhat short as a presidential biography, the attention it receives is well-deserved.

“Destiny of the Republic” has nearly all of the drama of Ackerman’s book, but with a tighter focus on Garfield’s assassination, poor medical care and death…and less emphasis on his politics. But where Ackerman fails to cover Garfield’s early life at all, Millard merely provides it with glancing coverage. Only Peskin’s biography thoroughly covers the first 95% of Garfield’s life.

But what Millard provides is unique: a damning and insightful indictment of the medical care Garfield received after being struck by an assassin’s bullet. She nicely weaves together the stories of Garfield, his assassin, his doctor and Alexander Graham Bell in a way that is interesting and informative.

To a lesser extent she also tells the stories of other important political figures such as Garfield’s vice president. But for Millard, politics are secondary to the science of life and death. And she clearly believes that Garfield could have lived to finish his term in office. Although imperfect as a presidential biography, “Destiny of the Republic” is entertaining, provocative and intensely interesting. (Full review here)

***During my journey through Garfield’s biographies I discovered another biography I need to read: Margaret Leech’s “The Garfield Orbit” which was unfinished when she died in 1974. Harry Brown completed the biography and it was published in 1978. Some observers have suggested it is superior to Peskin’s biography so I’m particularly curious to see how it compares. But, alas, that may have to wait until 2016. Or later.

19 thoughts on “The Best Biographies of James A. Garfield”

“As physicists, Oppenheimer and Einstein disagreed. But as humanists, they were allies.”

American Prometheus: The Triumph and Tragedy of J. Robert Oppenheimer by Kai Bird and Martin Sherwin