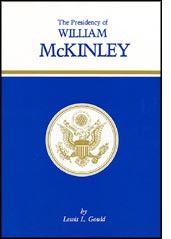 Given the focus of the American Presidency Series, it is not surprising that Gould’s book is less a biography of McKinley than it is a critical dissection and analysis of his presidency. And although the opening chapter briefly introduces a young McKinley to the reader, it is far too quick a meeting even for speed-dating.

The author begins his analysis of McKinley’s presidency by tearing down the second term of his predecessor, Grover Cleveland. But despite this potentially inauspicious start, Gould demonstrates virtually no other bias throughout the book. His analysis of the McKinley presidency is almost as objective an analysis as I’ve ever seen. He just as quickly criticizes McKinley as praises him – and there is plenty of both in these pages.

The book’s primary thesis is presented quickly and clearly: that McKinley broadened and strengthened the presidency and that, as a consequence, McKinley (not Theodore Roosevelt) was the nation’s first modern president. This premise is well-supported although much of the book unfortunately lacks the level of clarity of its mission statement.

In general, Gould’s analysis proves all business and provides few frills or thrills. The average reader (anyone not residing in academia) will frequently find the book dense and anti-sceptic. It lacks the color and flavor of more descriptive narratives, and lacks the breadth of a more comprehensive birth-to-death biography.

It frequently jumps from one topic to another (often connected only by details) and can be hard to follow. So although it is well-researched and thoughtful, it often seems more a grab-bag of useful insights and observations than a multi-faceted but systematic line of reasoning.

Very little of McKinley’s personal or family life receives attention, and there are surprisingly few observations about even his closest friends and advisers. Important and influential figures like Mark Hanna, Teddy Roosevelt and even Ida Saxton McKinley (his wife) go almost unnoticed in this text.

But the author’s keen focus on the McKinley presidency does pay dividends. Gould repudiates the popular notion of McKinley as a weak and compliant president. And while giving credit to previous biographers who have also seen McKinley as a strong leader, Gould seems to break new ground and certainly provides a committed reader with much to ponder.

Overall, Lewis Gould’s “The Presidency of William McKinley” is as worthy as an analysis of McKinley’s presidency (which is its goal) as it is disappointing as a traditional biography. This book is clearly geared toward a narrow audience already familiar with the domestic politics and global affairs of McKinley’s era. For the right audience, this book will prove meritorious and rewarding, but it is far from ideal for someone seeking a traditional biography of McKinley.