Not since Abraham Lincoln have I been this excited about the next president on my journey through the best presidential biographies.

Two years ago, twelve biographies of Lincoln consumed four months of my life with everything that 9,500 pages of (mostly) gripping narrative could offer.

Now I’m on to an even more audacious task: reading 18 of the best biographies of Franklin D. Roosevelt, a 12,000-page assignment that will fill the next six months – more than any other president.

In my case, FDR represents the inaugural president of the “modern era” – the first president remembered and described vividly by someone I knew. Growing up I was treated to colorful stories about FDR by my grandparents who lived a few miles from his retreat in Warm Springs, GA known affectionately as the Little White House. There may have been a few Hoover and Coolidge anecdotes but they weren’t nearly as animated…or upbeat.

“FDR” by Jean Edward Smith — published in 2007, this is by far the most popular of FDR’s single-volume biographies. It also happens to be the most highly-rated. Smith’s biography of Ulysses Grant was my favorite of that bunch, so I’m really looking forward to his take on FDR.

“Traitor to His Class: The Privileged Life and Radical Presidency of FDR” by H. W. Brands — this 2008 biography is currently the second most popular of the single-volume FDR biographies and was a 2009 finalist for the Pulitzer Prize. I’ve enjoyed (if not quite loved) each of the Brands biographies I’ve read so far – Jackson, Grant and TR – so this biography seems sure to please.

“FDR: Champion of Freedom” by Conrad Black — I remember this Canadian- born media magnate principally because of his criminal convictions for securities fraud. But somewhat to my surprise he is also an accomplished author. His 2003 biography of FDR is by far the lengthiest of this group and, while not particularly widely-read, it is quite well-regarded. I’m intrigued to say the least…

“FDR: A Biography” by Ted Morgan — published in 1985, this 30-year-old classic is reportedly an oldie-but-goodie. Morgan is a French-American biographer, historian and journalist whose biography of Winston Churchill was a 1983 Pulitzer-Prize finalist.

“Franklin D. Roosevelt: A Rendezvous with Destiny” by Frank Freidel — published in 1990, this single-volume biography was published 17 years after Freidel abandoned his six-volume series of FDR (he completed four volumes between 1952 and 1973).  Although I don’t yet know the complete story behind that incomplete effort, this biography is considered “awesome” by some…and “dry” by others.

Next I plan to read two well-known multi-volume series on FDR:

James MacGregor Burns’s two-volume series has the reputation of being the earliest (and possibly the most detailed) complete series on FDR. It has been described as providing excellent insight into FDR “the politician” if not quite on FDR “the man.” Its two volumes were published in 1956 and 1970; the second volume won a Pulitzer Prize.
– Vol 1: “Roosevelt: The Lion and the Fox (1882-1940)”
– Vol 2: “Roosevelt: The Soldier of Freedom (1940-1945)”

Finally, I plan to read eight topically-focused biographies of FDR:

“The Roosevelts: An American Saga” by Peter Collier — published in 1994, this offers a controversial peek into the Roosevelt family political dynasty (including TR’s and FDR’s branches of the family tree). Collier apparently favors TR over FDR, but the least flattering portrayal is reserved for Eleanor Roosevelt.

“A First-Class Temperament: The Emergence of Franklin Roosevelt” by Geoffrey Ward — this 1989 character study is said to provide unparalleled insight into FDR’s personality, though at the expense of a deeper understanding of his politics. This book is not widely-read but is strongly recommended by friends who have read it.

“No Ordinary Time: Franklin and Eleanor Roosevelt” by Doris Kearns Goodwin — this won the 1995 Pulitzer Prize in History and remains extremely popular. Although the book ostensibly focuses on the Roosevelts during World War II, it is said to resemble a broader dual-biography of the couple. I’ve been told this replaced Joseph Lash’s as the “go to” reference on FDR and Eleanor.

“Eleanor & Franklin” by Joseph Lash — Lash was a close friend of Eleanor and published a book about her life in 1964 (two years after her death). But after being granted access to her personal papers a few years later he spent five years writing this narrative of Eleanor and Franklin which, for two decades, was the Gold Standard on this power couple.

“The Defining Moment: FDR’s Hundred Days and the Triumph of Hope” by Jonathan Alter – this 2006 review of FDR’s first 100 days apparently spends as much time on his pre-presidency as it does the early days of his first term.

“Nothing to Fear: FDR’s Inner Circle and the 100 Days that Created Modern America” by Adam Cohen — this is another perspective on FDR’s “100 days” that promises a gripping narrative of the early days of the New Deal. Rather than focusing solely on FDR, this book features colorful assessments of many of FDR’s advisers.

“Supreme Power: Franklin Roosevelt vs. The Supreme Court” by Jeff Shesol — I included this 2010 book partly in an effort to better understand FDR’s Court-packing “stumble” and partly because the author was a member of my graduating class at Brown University. He became a successful speechwriter and comic strip author while I became an investment banker. Where did I go wrong?

“Roosevelt and Hopkins: An Intimate History” by Robert Sherwood — I complete my journey through FDR’s life with this classic, Pulitzer Prize-winning treatment of Roosevelt’s foreign policy during World War II. Sherwood was a speechwriter for FDR and I’m looking forward to his perspective on the Roosevelt administration. More importantly, David McCullough listed this as one of his two favorite presidential biographies of all time. Need I say more? 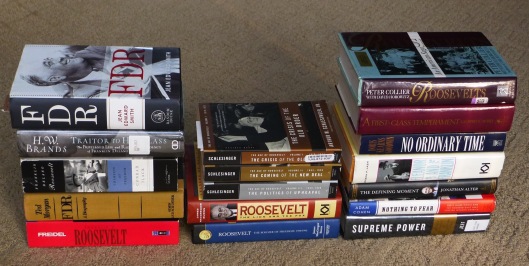