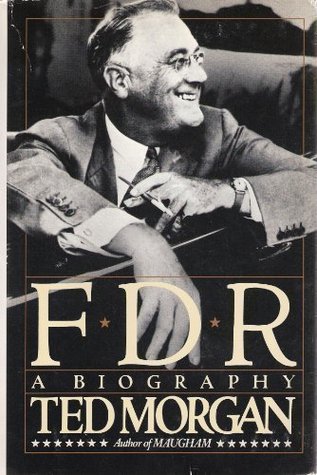 “FDR: A Biography” is French-American biographer, historian and journalist Ted Morgan’s 1985 biography of the 32nd president. Morgan was born Comte St. Charles Armand Gabriel de Gramont but changed his name (to an anagram of “de Gramont”) after becoming an American citizen in 1977. Morgan won a 1961 Pulitzer Prize in journalism and his 1982 biography of Winston Churchill won a Pulitzer Prize.

Almost 800 pages in length, Morgan’s biography is a weighty and detailed exploration of FDR’s life. But while written in an unpretentious and intelligible style and refreshingly balanced in its attitude toward its subject, this book does not provide a consistently engaging reading experience.

The very best presidential biographies are marvelously descriptive, packed with insight and wisdom, and engage the reader from start to finish. Unfortunately, Morgan’s biography falls short in each of these areas.

Surprisingly selective about which characters he robustly describes, most of FDR’s closest advisors, colleagues and family members come across as flat and uninteresting. Their relationships with FDR seem clinical rather than real and generally lack vitality and vibrancy.

And although Morgan provides significant detail in this well-researched book, the depth and frequency of analysis he provides is frustratingly uneven. At times he offers fascinating and thoughtful observations about the significance of an event while at other times he inexplicably provides no observations or judgement whatsoever.

Nor does he provide much in the way of historical context – at all. Readers who lack a robust understanding of global events during the 1930s and 1940s will fail to connect many of FDR’s actions with the events transpiring around him.

Finally, although this is a lengthy and detailed biography, many events of great significance are given surprisingly cursory treatment. FDR’s “First 100 Days” is covered in just a few pages and the first two crucial (and eventful) years of FDR’s presidency disappear in fewer than forty pages. The passage of the Social Security Act and the Securities Act of 1933 are covered so quickly that they could easily be missed altogether.

Fortunately, there are many satisfying moments in Morgan’s treatise. While portraying the young FDR as a largely aimless, spoiled aristocrat-in-training the reader is treated to an interesting chapter on his education at Groton. And later, with FDR firmly established in the presidency, Morgan provides a fascinating glimpse into the logistics involved in getting FDR to the Casablanca Conference in 1943.

On a more historically significant note the biography offers an extremely thoughtful examination of why it took the Allies nearly three years to mount a cross-Channel invasion of Europe. And almost three-fourths of the way through the book is perhaps its best chapter – devoted to an explanation of FDR’s success as president. These thirty pages are probably the best in the book and provide as close to a character analysis as the author provides.

Overall, Ted Morgan’s “FDR: A Biography” is a comprehensive and lengthy biography that proves more frustrating than rewarding. While nominally providing significant detail, Morgan’s book offers few overarching themes or messages and provides remarkably little in the way of penetrating analysis. Readers familiar with FDR and his era will probably find many of Morgan’s anecdotes and detail interesting; those simply seeking an engaging presidential biography will likely leave disappointed.

5 thoughts on “Review of “FDR: A Biography” by Ted Morgan”

“For his quest for the presidency Adams paid a high emotional and psychological price.”