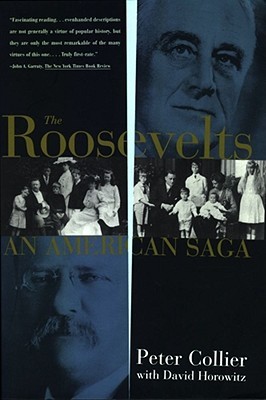 This 482 page biographical survey of the two major branches of the Roosevelt family – TR’s “Oyster Bay” clan and FDR’s “Hyde Park” family – is broad and multi-generational. It is also quite readable. But the focus is nearly always on the private lives of its subjects and there is no effort to cover the presidencies of TR or FDR in more than a perfunctory way.

In order to elevate the narrative beyond a series of entertaining but gossipy anecdotes the author promises an explosive portrait of battles waged between the two branches as they struggled to control the family’s legacy. Unfortunately, this is a much bolder promise than can be delivered. Evidence of the alleged inter-family combat proves quite thin and almost entirely unconvincing.

Much of Collier’s book is entertaining but feels slightly tabloidesque. And many of the stories of the various family members are irrelevant or entirely inconsequential. A significant drawback to focusing so intently on TR’s and FDR’s families seems to be the hazard of wading into detail that is extraneous and superfluous. Still, many TR- and FDR-focused biographies lack insight into their spouses and children, so it almost seems ungracious to complain about too much insight.

Unfortunately, the author’s portrayals of various Roosevelt family members are often unbalanced and seemingly partisan. Collier’s most disparaging portrait is reserved for Eleanor Roosevelt who is described as neurotic and withdrawn – hardly resembling the flawed but noble champion of great causes most readers would recognize. And while TR receives ample praise for his brand of politics, FDR’s progressive tendencies receive noticeably fewer plaudits.

At the very least, readers new to TR will learn enough from this book to desire a deeper understanding of his presidency; many will also understand at a high level the spectacular drama embedded within his post-presidential African safari as well as his audacious adventure down the River of Doubt four years later. Readers new to FDR will find themselves eager to dive far deeper into his presidency (the New Deal, in particular).

Overall, Peter Collier’s “The Roosevelts: An American Saga” is a readable but disappointing multi-generational biography. For anyone already familiar with the lives of TR and FDR, this book adds valuable (if often gratuitous) color. But it fails to deliver on its central premise – dramatic conflict between the two branches of the Roosevelt family – and from the standpoint of serious biography it is entirely lacking.

2 thoughts on “Review of “The Roosevelts: An American Saga” by Peter Collier”