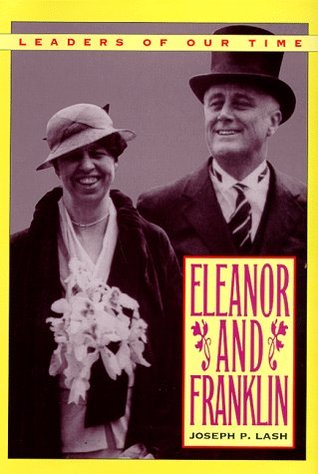 “Eleanor and Franklin” by Joseph P. Lash was published in 1971 and earned the Pulitzer Prize for Biography. Lash was a radical political activist but grew disillusioned with communism and later became a journalist and author. His 23-year friendship with Eleanor Roosevelt (and proprietary access to her personal papers in 1966) formed the basis for this authorized biography. Lash died in 1987 at the age of 77.

The book’s title notwithstanding, this is not a dual biography of Eleanor and Franklin Roosevelt.  FDR fails to appear until more than 100 pages have elapsed. Even then, Franklin’s appearances seem more often designed to highlight Eleanor’s virtues than roundly describe his life or political career. To some extent it is a book focused on the relationship between Eleanor and Franklin.

But what “Eleanor and Franklin” really proves to be is an insightful, detailed and often dense review of the life of a remarkable woman who transformed herself from an insecure, orphaned young girl into the compelling champion of a wide array of humanitarian causes. Despite its length (723 pages) this book only covers Eleanor’s life up to FDR’s death. The last 17 years of her life are chronicled in Lash’s follow-up volume “Eleanor: The Years Alone“.

Lash is not bashful about revealing Franklin’s and Eleanor’s numerous faults, but given his friendship with the former First Lady it is not surprising this is generally a sympathetic treatment of Eleanor. Equally unsurprising is that the book proves quite discreet; despite his proximity to the Eleanor and Franklin, Lash is reluctant to publicly ponder their private lives or most personal foibles.

While the author is a capable writer, his prize-winning tome is more a detailed history than an engaging narrative or character analysis. The book’s matter-of-fact style leaves it far less engrossing than the subject matter deserves and some readers will find it difficult to persevere to the end.

In addition, Lash furnishes almost no historical context so readers not already familiar with world (and domestic) events will likely miss the significance of many events or moments. But it’s deepest flaw is its cursory treatment of FDR who is less a partner in the relationship under scrutiny and more the foil.

The book’s strengths are numerous and notable. Most importantly, it peels back the public-facing layers of Eleanor’s complex life and highlights her selfless advocacy of people and causes that merited the attention of someone with her influence and devotion. It also demonstrates the accommodations Franklin and Eleanor made for each other in order to sustain their unique partnership during his political career.

Lash also does an excellent job describing the multifaceted (and often tense) relationship between Eleanor and FDR’s mother, Sara.  And his review of the First Lady’s fact-finding trip to the South Pacific during World War II is both fascinating and revealing.

Overall, Joseph Lash’s “Eleanor and Franklin” provides an interesting and often insightful perspective into the life of Eleanor Roosevelt and her partnership with Franklin. Because FDR appears only in a supporting role (and, even then, largely as the antagonist) this book is not capable of serving in any way as a biography of the 32nd president. But even as review of Eleanor’s life this is a good book which could have been great.

2 thoughts on “Review of “Eleanor and Franklin” by Joseph Lash”