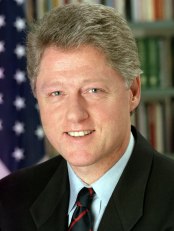 William J. Clinton (born William J. Blythe III) has the distinction of having been president of the United States and almost serving as the nation’s first “First Gentleman.”

My earliest memory of Clinton dates to 1988 when he gave an interminably long speech at the Democratic National Convention (ostensibly to nominate Michael Dukakis). After watching his performance I was all but certain I would never see him again…

He went on to win the presidency four years later and to serve two full terms. In stark contrast to his predecessor, Clinton seemed born to be a politician. And president.  His years in the White House were both exceptionally brilliant and extraordinarily clumsy.

But his life seems perfect for a great biography…

* I’m starting this portion of my journey with Patrick Maney’s “Bill Clinton: New Gilded Age President.” Published in 2016, this biography tracks Clinton’s life (to one degree or another) from birth through the Obama presidency. Its focus, however, is on Clinton’s presidency. This book is not widely-read but seems worth a test-drive.

* Next I’m tackling David Maraniss’s “First in His Class: A Biography of Bill Clinton.” Dating back to 1995, it covers Clinton’s life up through his 1991 announcement of his candidacy for president. Both widely-read and frequently reviewed, this seems to promise a balanced analysis of Clinton’s character and a solid review of his coming-of-age.

* I finish with John F. Harris’s 2005 “The Survivor: Bill Clinton in the White House.”  Focused almost exclusively on Clinton’s two-terms in the White House, Harris apparently reveals “the good, the bad, and the ugly” about this presidency…which often seemed to me as though it careened from crisis to crisis.

I have reasonably high expectations for the Clinton biographies I’m reading but not even two decades have passed since his presidency ended. And he may well live another decade or more. So it is all-but-certain the definitive biography of Clinton has not yet been written.

But one thing is clear: when the definitive biography of POTUS #42 is published, it promises to be fascinating (in almost a Teddy Roosevelt meets JFK kind of way).