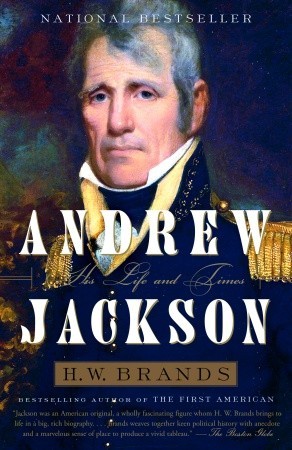 “Andrew Jackson: His Life and Times” is H.W. Brands’s 2005 biography of our seventh president. Brands is a professor at the University of Texas at Austin and a prolific author.  He has written nearly thirty books on a wide range of historical topics, including biographies of Ulysses Grant, Theodore Roosevelt and Aaron Burr.  He is also the author of one of my favorite non-biography history books: “Lone Star Nation: The Epic Story of the Battle for Texas Independence.”

Although I find myself somewhat disappointed by this biography of Jackson, it is certainly not without merit.  Indeed, Brands’s biography is a solid, steady exploration of Jackson’s life and its many contradictions and crescendos. However, after reading several earlier biographies of this president, I’m not sure what new insight or analysis Brands offers and, as a result, why a reader new to this president should choose Brands’s biography over others.

To its credit, Brands’s biography does a much better job than most biographies in providing the reader with a broad, relevant historical framework within which to place Jackson and his actions. Where other biographies assume the audience is aware (by whatever means) of the events of importance taking place in the nation’s capital while Jackson is roaming the frontier, Brands never leaves such knowledge to chance.  Instead, he is careful to ensure the reader is cognizant of important moments in our nation’s history that impacted the political and economic climate in which Jackson operated.

In addition, Brands’s quest to add context to his discussion of Jackson’s life also leads to his inclusion of a number of topics (and characters) I have not read about in previous presidential biographies. Among these are useful snippets regarding Alexis de Tocqueville’s trip to America, a tactical analysis of “dueling” which was a favored form of dispute resolution in Jackson’s early life, a helpful explanation of the issues surrounding British impressment of American sailors and colorful descriptions of Davy Crockett, Sam Houston and Jean Lafitte (each of whom, the reader quickly agrees, deserve vibrant and spirited introductions).

However, for all I liked about Brands’s biography, I found it far from ideal. First, given his propensity for describing lesser-known historical figures thoroughly in vivid language, he is surprisingly deficient in his introduction of more critical characters such as Martin Van Buren (the “Little Magician”) who was to Andrew Jackson much as Karl Rove was to George Bush. Other lesser-known, but equally critical, players are left poorly introduced as well such as Amos Kendall and Francis Blair, who formed the core of Jackson’s “Kitchen Cabinet” and were each tremendously important to the story of Jackson’s presidency.

Second, certain historical events are less well-covered than seems appropriate, such as Jackson’s decision to replace nearly his entire initial Cabinet (causing no small degree of controversy within the Senate) as well as the presidential campaigns of 1824 and 1828. Brands’ treatment of the former feels needlessly rushed – almost perfunctory – while his description of the latter seems woefully incomplete with almost no attention dedicated to Van Buren’s masterful behind-the-scenes advocacy of Jackson’s candidacy.

Stylistically I tend to enjoy a more smoothly-flowing, narrative style of writing than that which Brands offers in his “Andrew Jackson.”  This biography often seems like a collection of detailed, highly factual (but not particularly opinionated) newspaper articles; they are individually informative, but collectively lack a seamless, cohesive story or theme. In fact, while reading Brands’s biography, a new student of Jackson might actually be unaware of the overwhelming historical significance of Jackson’s presidency and his numerous accomplishments.

Brands seems to prefer for the facts speak for themselves, but at the cost of allowing a less-attentive reader to miss the forest for the trees.  If you are not a sophisticated student of history or had not previously read Remini or Marquis James, you might inadvertently miss the awe-inspiring significance of Jackson’s expansion of the power of the presidency (made even more dramatic by his previous distaste for a strong federal government).  And unlike most other Jackson biographers, Brands does not take Jackson to task for being a slaveowner or for his brutal treatment of the Indians.

Finally, Brands’s most thoughtful impressions and perspectives of Jackson are left to the last six or eight pages of the book.  These are easily the most valuable pages of his biography, and are among the most insightful pages of any of the presidential biographies I’ve yet read.  But the wisdom they impart comes too late to appropriately augment the wisdom contained in the previous five-hundred-plus pages.  Even a measured sprinkling of this insight across the previous chapters of the book would have been incredibly useful.

Overall, H.W. Brands’s “Andrew Jackson” is a good, but not great, biography of Andrew Jackson. His writing style, failure to highlight important themes throughout the book and a few curious omissions are contributing factors. Subjectively, the most disappointing issue for me was the fact that I rarely found moments when I simply could not put the book down. Although Brands’s biography is detailed, workman-like and free of bias, for me it does not provide enough analysis or insight, and its emphasis seems to be on presenting topics accurately rather than with passion and interpretation.

6 thoughts on “Review of “Andrew Jackson: His Life and Times” by H.W. Brands”