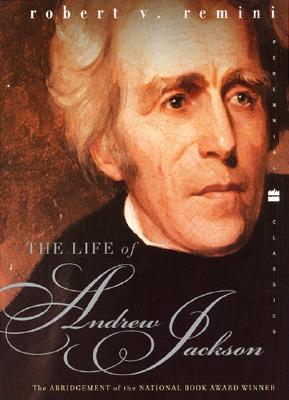 “The Life of Andrew Jackson” by Robert Remini is the single-volume abridgment of the author’s classic three-volume series on Andrew Jackson which was published between 1977 and 1984. Although he confessed to finding the distillation process “traumatic and agonizing,” Remini’s abbreviated biography successfully crystallizes (in just one-fourth the space) the essence of his longer series and saves the reader nearly one-thousand pages in the process.

Remini was a historian and professor at the University of Illinois and was known as an exhaustive biographer of Andrew Jackson.  During his forty-year literary career he authored dozens of books, among them biographies of Jackson, Daniel Webster, Henry Clay and Martin Van Buren.  He was named historian of the U.S. House of Representatives in 2005 and later authored a narrative history of that legislative body.  Remini died earlier this year at the age of 91.

Although he claimed difficulty in synthesizing the three-volume series, readers of this single-volume biography who have previously read Remini’s series on Jackson will recognize most, if not all, of the narrative.  I assume, therefore, that the difficulty Remini encountered was not in shortening and re-writing the more extensive text, but was more a matter of choosing which three-of-every-four sentences to strike, and which one to keep.  On that basis this biography is an extremely stylistically familiar synopsis of the excellent and much longer series.

Also faithfully preserved in this one-volume biography is the author’s unapologetic admiration for Jackson as a political leader, national symbol, and unrelenting force behind a new era of popular democracy.  But also retained is Remini’s criticism of Jackson for his most acute flaws and failures – including his treatment of the Indians, his indifference to the plight of slaves and his often abysmal appointments of officeholders.  However, readers who found Remini too lax in scolding Jackson’s foibles and deficiencies in his multi-volume series will be similarly vexed by this biography.

Irrespective of one’s view of Remini’s sympathy for Jackson, the seventh president proves an almost perfect figure for an astute, penetrating and delightfully gripping biography.  Jackson – as both a military leader and politician – was radiantly charismatic, sometimes maddeningly volatile and exceedingly devoted to the advancement of the “common man’s” cause.  He almost single-handedly changed the trajectory of American politics during his presidency.  And as a husband he was (much to my surprise) charmingly and uncommonly devoted to his wife – even after her death.  In every way he deserves a great biography and Remini proves himself up to the challenge.

Overall, Robert Remini’s “The Life of Andrew Jackson” is a very good summary of his even better three-volume series on Jackson.  This biography captures nearly all of the best of the series while leaving behind only less-crucial detail and ancillary color.  Very few people will ever consume both the abridgment and the series, but what is clear from the experience is that as significant a task reading nearly fourteen-hundred pages may seem, Remini’s three-part series on Jackson is worth every moment invested and repays its audience in a thousand small ways.

But for the time starved reader, Remini’s single-volume biography of Andrew Jackson is an easy – and extremely worthy – choice.  This biography is wonderfully insightful, rich with cogent observations and analysis, and capture’s the core of Remini’s wisdom in an incredibly efficient and effective way.