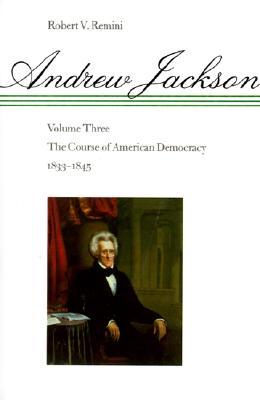 “Andrew Jackson: The Course of American Democracy (1833-1845)” is the final volume in Robert Remini’s trilogy on Andrew Jackson. Completed in 1984 as the first full-scale biography of Jackson since Marquis James’s 1938 epic, Remini’s series immediately garnered significant attention – and praise.  He later published a single-volume abridgment and readers now seem drawn to Remini’s shorter treatment of Jackson, at the unfortunate expense of this meritorious series.

Remini was a historian and professor at the University of Illinois and authored several biographies during his forty-year literary career (of Daniel Webster, Henry Clay, John Quincy Adams and Martin Van Buren, among others).  He was named historian of the U.S. House of Representatives in 2005 and later authored a narrative history of that legislative body. Remini died earlier this year at the age of 91.

Andrew Jackson, through the force of his character and his idiosyncratic charisma, commanded America’s attention (and often respect) like no other president between Jefferson and Lincoln. Few figures in American history were as colorful, idealistic, flawed, committed to core principles, devoted to the will of the American people and as popular and effective a leader.  Such a compelling personality clearly deserves a grand biography and Remini provides Andrew Jackson exactly that.

This volume completes Remini’s series by covering the last thirteen years of Jackson’s life – from his second presidential term through his retirement at The Hermitage in Tennessee.  These years encompass his successful resolution of the Nullification Crisis, his dissolution of the Second Bank of the U.S. and his efforts to annex Texas.  Toward the end of this volume, Remini provides a thoughtful, reasoned synopsis of Jackson’s legacy.

In these pages Remini also completes his well-argued assertion that Jackson transformed the United States from a republic into a true democracy.  The reader witnesses Jackson redirect the forces of democracy from the wealthy and powerful to “all the people” through his actions to reform government and empower the common man. Remini occasionally point outs that Jackson did not, of course, include slaves or Indians in that particular crusade.

Like his earlier volumes, this book is lively and engaging and provides the reader with an excellent overview of the social and political issues of Jackson’s era. The longest book of the series, this volume feels 10 or 20% overweight.  At this point, however, the reader is so engaged in the twilight of Jackson’s life that any delay in getting to the finish line is easily overlooked.

But if certain sections of the book seem to border on tedious (like the Bank of the U.S. discussion which finally exhausted me), Remini more than balanced the experience with generously insightful analyses of Jackson’s annual messages to Congress, wonderful descriptions of his personal and political relationships and a cogent review of his legacy as a national political leader.

Most criticism leveled at Remini argues he is too forgiving of Jackson’s faults and too wedded to the notion of Jackson’s “greatness.”  While his portrait of Jackson may be too merciful for some, Remini is not blind to Jackson’s faults nor does he try to obscure them.  At times he directs harsh criticism at Jackson for his public failures and personal foibles. But in the end he sees Jackson’s treatment of the Indians as a deeply flawed, but honest, effort to save them from annihilation by moving them west, and he forgives Jackson for viewing slavery no differently than many of his contemporaries.

Overall, this volume of Remini’s series on Andrew Jackson was a satisfying conclusion to an excellent series. Remini convincingly demonstrates Jackson’s success as a political leader, government reformer, defender of the Union and, ultimately, champion for true democracy. Though it could be read in isolation, this volume seems far more useful and enjoyable when read as part of the complete series.

11 thoughts on “Review of “Andrew Jackson: The Course of American Democracy (Vol 3)” by Robert Remini”