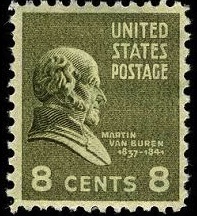 The young Martin Van Buren, it turns out, was a superb politician.  Not a charismatic or socially instinctive soul, he nonetheless had quite a knack for politics – even as a teenager. As he aged, he thrived on the thrill of the chase whether that meant winning a legal argument in the courtroom, using a hidden loophole to his legislative advantage, or simply out-hustling his opponent and winning an election.

Early in his political career he didn’t seem to mind swimming upstream, even if that meant disagreeing with his neighbors and friends (sometimes against his better judgment).  Later in life he became more malleable – and cautious – and was slower to take sides on the important political issues of the day.  In short, he became quite a skillful politician…and a non-committal one when appropriate.

But despite being one of the best politicians of his day the “Little Magician” made quite a mediocre president. He seemed to forget (or ignore) most of what assisted in his political rise and was an uninspired chief executive.  To be sure, his presidency was also hurt by the faltering economy he inherited from the Jackson administration and which grew so bad it has been referred to as America’s First Great Depression.  But he was unable to ease the adversity which pained America and his primary accomplishments in office were largely unseen, or ineffective.

The first of two biographies of this president I read was “Martin Van Buren: The Romantic Age of American Politics” by John Niven.  Though incredibly detailed and exceptionally well-researched, this biography falls flat in two areas.  First, it focuses too intensively on the intricacies of New York state politics during Van Buren’s rise in politics. The topic is relevant but the detail proves overwhelming at times and there is little sense of what is “most important” rather than just “nice to know.” I initially attempted to absorb every bit of provided minutiae while waiting for a moment of clarity to arrive…but eventually realized I was on my own.

Second, Niven provides few themes or key lessons to bear in mind while absorbing Van Buren’s life, and he provides few conclusions to reinforce important points. Good authors provide the relevant facts and may hope their readers are able to interpret the broader messages, but great authors help guide the way – particularly for those of us who are just reading “for fun.”  In the end, I found Niven’s book astonishingly thorough and fact-filled, but not particularly instructive or rewarding. (Full review here)

The second, and final, biography of Van Buren I read was “Martin Van Buren and the American Political System” by Donald Cole.  This biography is about one-third shorter than Niven’s but seems no less comprehensive. Unfortunately, Van Buren himself is no more exciting a character than in Niven’s book; both authors portrayed him as a man who seemed to eat, sleep and breathe nothing but politics.

However, the lessons to be learned and the conclusions to be drawn from Van Buren’s political rise and his term in office are far more evident in Cole’s biography. In order to prevent the reader from losing the big picture to the cacophony of innumerable details, Cole thoughtfully sprinkles the text with appropriate editorial remarks and observations designed to ensure a high level of comprehension.  Although Cole’s biography is more academic than I would prefer, it is enlightening, reasonably satisfying and clearly the best in this uncrowded field. (Full review here)

25 thoughts on “The Best Biographies of Martin Van Buren”