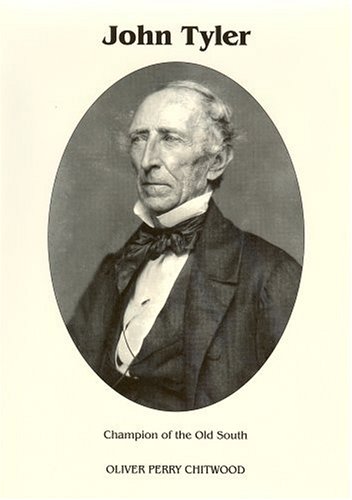 “John Tyler: Champion of the Old South” is Oliver Chitwood’s 1939 biography of our tenth president. Born during the Ulysses S. Grant presidency, Chitwood was an undergraduate at William and Mary College (nine decades after Tyler himself) and earned a PhD at Johns Hopkins. He spent nearly forty years as a professor of history at West Virginia University and was known as a leading authority on American colonial history. Chitwood died in 1971 at the age of ninety-six.

Chitwood’s biography has long been the go-to reference for readers seeking insight into John Tyler and his presidency. The biography was obviously very well-researched and quite carefully composed. Few comprehensive works on Tyler have been published in the last several decades and given the lack of excitement relating to Tyler’s presidency it seems a safe bet that Chitwood’s biography will long retain its position as a presidential “classic” – on this president at least.

With a bit less than five-hundred pages of text “John Tyler: Champion of the South” is perfectly-sized for a comprehensive but not exhausting biography and proves straightforward, interesting and almost…fun to read. This, despite the fact that Tyler himself generally seems humorless, dry, and not at all like the back-slapping politician you would want to find yourself drinking a beer with. But his life-story (like many of the early presidents) is quite compelling.

To the author’s credit he introduces most chapters with a paragraph of historical context appropriate to the topic of the moment.  And rather than leaving key themes or conclusions to chance (not much of a risk since his writing style is so easy to digest) Chitwood liberally provides his own interpretation of the presented facts – often a summary of what he felt Tyler did right or wrong at some key moment in time.

That Chitwood is an advocate of John Tyler is immediately obvious, and never in doubt. He clearly wrote this biography hoping to reclaim some credit for (or at least soften history’s censure of) this former president. Many interpret his defense of Tyler as blatant pandering to a failed president who possessed critical intrinsic faults (he was a strong defender of slavery for starters). But much of Chitwood’s “defense” of Tyler is more enlightened and thoughtful than this and little about the book suggests the author is a reckless apologist.

At its core, Chitwood’s thesis centers on the opinion that throughout Tyler’s life he was nothing if not consistent in his core beliefs for states’ rights and his willingness to defend those beliefs both as a legislator and chief executive – even when it meant the Whig party he was tenuously affiliated with abandoned him and went to great lengths to destroy the remainder of his presidency. I believe history shows Tyler was less faithful to states’ rights than Chitwood argues, but there can be no doubt that he and the Whig party found themselves at war with each other, to no useful end for either.

I find it interesting that Chitwood chose to study a man whose impact as president fell so far short of his hopes, and his talents, and whose personality seems so mysteriously opaque. Few of Tyler’s personal letters survive and the impression we take from this biography is that Tyler was Virginia’s ascetic version of New England’s Puritan John Adams…except Adams occasionally found himself the life of the party (both figuratively and literally).

Overall, Chitwood does more with John Tyler’s life and legacy than I thought possible. In contrast to Freeman Cleaves’s contemporaneously published biography of William Harrison, Chitwood produced a very readable and fast-flowing biography. This is not merely a fuzzy blur of facts and circumstances, however, but is well-stocked with helpful observations and conclusions. Chitwood’s “John Tyler” nicely balances its author’s attempt to redeem Tyler’s presidential legacy while simultaneously demonstrating the significant extent of his foibles and failures.

2 thoughts on “Review of “John Tyler: Champion of the Old South” by Oliver Chitwood”