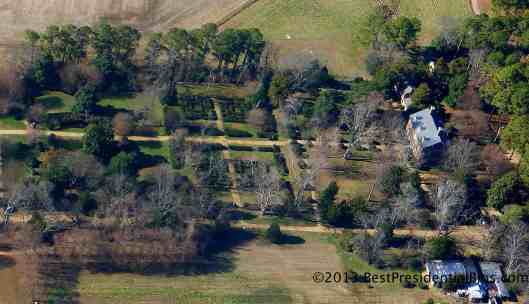 William Henry Harrison was the ninth president of the United States, and the fifth president to have been born in Virginia. Although I think of him more as a midwesterner (he spent most of his life in the Indiana/Ohio area) his family had a long history in the Commonwealth. And when I found out his birthplace was a thirty-minute flight from my home airport (and ten minutes from where my plane gets its annual “check-up”) you know I had to plan a trip!

Berkeley Plantation’s 1726 mansion is the birthplace of president-to-be William H. Harrison. It also happens to be the birthplace of his father, Benjamin Harrison V who was one of the signers of the Declaration of Independence and the fifth governor of Virginia. But wait – there’s more: this was also the ancestral home of William Harrison’s grandson Benjamin Harrison who became the twenty-third president of the United States.

Berkeley Plantation sits majestically on the north bank of the James River about seventeen miles as the crow flies, or a half-hour drive, southeast of the Virginia state capitol building. Although the house itself does not appear as grand or majestic as Jefferson’s Monticello and is less well-known than Madison’s Montpelier its grounds seem to be exquisitely maintained. Clearly visible in the photo are several gorgeous terraces with boxwoods.

From nearly 2,000 feet overhead, Berkeley Plantation appears to be a more interesting destination than any of the previous presidential estates I’ve overflown (except Monticello). And on the first Sunday in November each year the plantation takes part in the Virginia Thanksgiving Festival commemorating America’s first Thanksgiving which was held on these grounds in 1619.

P.S. – for the fellow aviation geeks (sorry) who have asked me to show the location of my aerial photos, the aviation chart below marks the Plantation’s location. An arrow points to “X” which marks the spot, at bottom-center of the photo just southeast of Richmond’s Class C airspace. And yes, this really is how I navigated to the estate. The “X” to the right of Berkeley Plantation marks the location of former president John Tyler’s “Sherwood Forest Plantation” – but that’s a story (and photo) for another post…!