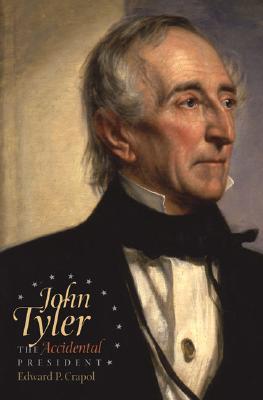 “John Tyler: The Accidental President” was published in 2006 and is Edward Crapol’s third book. Crapol is a retired Professor of American History at the College of William and Mary where he began working in 1967 (and from which John Tyler himself graduated in 1807).

Crapol’s biography began as a book focused on the foreign policy of the Tyler administration. But after commencing research, he decided to expand the scope to a broader swath of Tyler’s life. While few readers will find it an ideal full-scale biography, equally few will be surprised at its origin since one of its strengths lies in its discussion of foreign affairs (the annexation of Texas, in particular).

The author’s central premise is immediately apparent: although Tyler was not a great president, he was often a bold and effective leader and was certainly “less bad” than history remembers. Of course when the bar is set that low on page three, it is not surprising that the point seems reasonably proved by the book’s end.

Crapol appropriately credits Tyler for establishing precedent relating to vice presidential succession in the event of a chief executive’s death (it had been vaguely understood to that point) and argues that Tyler was not a fervent States’ rights supporter – as claimed by earlier biographer Oliver Chitwood. Instead, this author contends, Tyler was willing to bend his principles when expedient – such as the case of annexation of Texas without Senate ratification.

But while he consistently defends Tyler’s legacy, this biography is no blind apology for John Tyler. At numerous points in the book Crapol berates Tyler for his occasionally poor decisions, his pathological inability to recognize the horror of slavery, and for being the first and only “traitor president” of the United States (by supporting the South’s secession from the Union).

Crapol’s biography is dense at times but is not quite long or expansive enough to be considered a true “full-scale” biography. Very little of Tyler’s personal life is discussed and Tyler’s interaction with his family and friends is rarely witnessed.  While there seems to be a dearth of historical evidence relating to his private life, early in the book the author states that Tyler was much warmer and more affectionate than is often presumed. He seems to hint that a colorful portrait of Tyler will soon emerge…but it does not.

More critically, this biography is thematic rather than chronological and often reads like a series of essays that wander into unnecessary tangents. The book also focuses on Tyler’s presidency at the apparent expense of his three decades of public service prior to becoming vice president. Equally puzzling to me was the author’s failure to focus more attention on Tyler’s decision to accept the vice presidential nomination from a political party with which he almost never agreed (the Whigs). That decision, of course, ultimately led to the destruction of his political future and, fairly or not, his legacy.

To be clear, this book has its share of strong points – Crapol’s introduction provides an excellent roadmap for the book, his analysis is often insightful and he is willing to be provocative where the evidence (if not sentiment) is on his side. But I expect a broader perspective from a presidential biography and I found the book’s focus inconsistent and often awkward. Crapol’s biography has much merit as a supplemental work but cannot replace Chitwood’s as the definitive biography of John Tyler.

6 thoughts on “Review of “John Tyler: The Accidental President” by Edward Crapol”