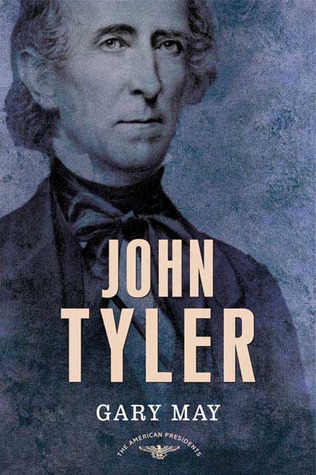 “John Tyler” by Gary May was published in 2008 and is the youngest of my three biographies of Tyler. May is a professor of history at the University of Delaware and specializes in American political, diplomatic and social history. He is the author of five books, the most recent of which is a book on the Voting Rights Act published earlier this year.

May’s biography of the tenth (and “accidental”) president is the first member of “The American Presidents” series I’ve read as part of my journey. In the past I have been hesitant to add them to my library as they often seem less serious and scholarly than their counterparts (partly due to their nearly universal brevity). However, May’s book has enhanced my perception of the series and I’m looking forward to reading the others I have in my library.

With just 151 pages of text, this is easily the lightest of my biographies of John Tyler. Although its length may appear unfairly pithy – even for a president whose legacy is unspectacular – May’s treatment of Tyler is neither superficial nor perfunctory. In fact, of the fifty-one presidential biographies I’ve read so far, this resides near the very top of the list in terms of efficiency and impact-per-page.

Happily, the author does a better job than many biographers of writing in a clean, crisp, modern and effective style. His points are universally clear, the direction of the storyline is never in doubt and very rarely does he wander into unnecessary detail. The discussion of Tyler’s negotiations with Great Britain concerning the border of Maine and Canada is among the very few instances of relative over-focus I can recall in the book.

As you might expect from a book of relatively few pages covering the complicated life of a former president, economy requires compromise. To keep the page count low May is often forced to skim over history’s messy details, making many situations appear simpler than was really the case. Additionally, the biography seems not to break any new ground on the Tyler presidency, merely summarizing and replaying it.  But only serious Tyler scholars and historians will notice, or care, and for the vast majority of the audience the author’s brevity and focus breeds clarity.

Given the paucity of pages in May’s biography, then, it is ironic that his exploration of Tyler’s personal life well-exceeded the attention it received in other John Tyler biographies I’ve read.  And given the sense one generally gleans of Tyler as an unexciting and uncharismatic figure, the colorful dynamics this author reveals of Tyler’s family proves entertaining. Few readers will set this biography aside without wishing it were possible to meet Tyler’s second wife.

Overall, Gary May’s “John Tyler” was a worthwhile, if somewhat too brief, exploration of John Tyler’s life and political career. The author’s articulate style of observing and interpreting history was refreshing in the context of many presidential biographies which require a PhD to fully absorb and appreciate. For most readers the level of detail offered by this biography is sufficient to develop an appreciation for Tyler’s life and difficult legacy; for the remaining few it should at least serve as a useful stepping stone to further study.