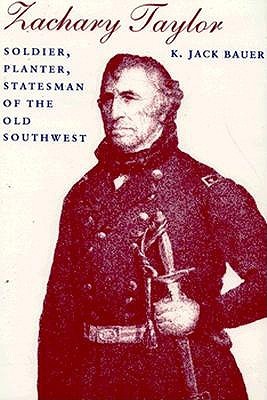 “Zachary Taylor: Soldier, Planter, Statesman of the Old Southwest” is K. Jack Bauer’s 1985 biography of the twelfth U.S. president. Early in his career Bauer worked at the National Archives and later became a naval historian. He was also a history professor at Rensselaer Polytechnic Institute for more than two decades. Bauer died in 1987.

This book is widely regarded as the definitive biography of Taylor, and for good reason. Relying on a wide array of primary sources, this biography is clearly the result of exhaustive research. I suspect that nowhere other than at Langley or Fort Meade (or perhaps the J Edgar Hoover Building) has anyone compiled so thorough an account of the movements of any one individual throughout his or her life.

Two things are quickly obvious when reading Bauer’s narrative of Taylor’s career. First, despite Zachary Taylor’s long service as a military officer and his roles in multiple wars (beginning with the War of 1812) his life was far more dull and uneventful than one might assume. The author admits as much in his introductory remarks when he warns the reader that Taylor’s career was largely “mundane” and “boring.”

Second, where most biographers tend to exhibit a conspicuous sympathy for their subjects, the deeper Bauer gets into this soldier-president’s life the less enthusiastic the author seems to become. Bauer castigates Taylor for his lack of education, sophistication and imagination. He variously labels Taylor self-centered, illogical, lacking in curiosity and virtuosity, and devoid of great military instincts. Even Taylor’s military victories are ascribed more to incompetent opponents than clever tactics by General Taylor.

Rather than seeming grossly unfair or imbalanced, the author’s perspective comes across as a harsh but probably entirely accurate assessment of Taylor’s competencies as a soldier and a statesman. Based on Bauer’s review of Taylor’s life through his service in the Mexican War, the fact he was nominated by the Whig party, much less elected president, seems not only improbable but almost preposterous.

But if the strength of Bauer’s biography is in his ruthless reporting of Taylor’s shortcomings, the greatest weakness in the book is the author’s pathologically detailed survey of Taylor’s life – trivialities and all. Although Bauer was meritoriously studious in following Taylor’s actions during long stretches of time when a less patient biographer would have lost the trail, the reader is subject to so much uninteresting (and unimportant) day-to-day minutia as to prove mind-crushing.

The first two-thirds of the book covers Taylor’s pre-presidency and it is during this stretch that the less tolerant reader will move on to other tasks…such as painting the house or filing tax returns. While Bauer’s analysis of various skirmishes and battles is excellent, most of this insight is useful only for a military historian. And few will enjoy reading of Taylor’s exploits building roads for the army or learning how he procured mules for supply wagons.

The remaining chapters, on Taylor’s nomination, election and service as president, are more interesting. Although these pages are not uniformly inspirational, Bauer supplies a steady stream of insight and wisdom pertaining to Taylor’s actions as president. For most readers, the majority of the book’s merit is absorbed here. But the curious reader is left wondering what inspired Bauer to study Taylor’s life with such intensity.

Jack Bauer’s biography of Zachary Taylor is almost certain to endure as the definitive study of the twelfth president’s long career – and short presidency – but is unlikely to inspire any but the most devoted of Taylor’s disciples. Although packed with excellent scholarship on Taylor’s life and presidency, Bauer’s biography will prove tortuous and formidable for most readers.