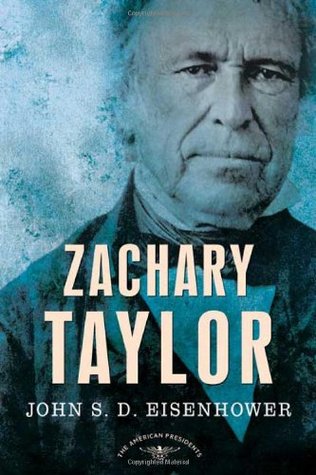 “Zachary Taylor” by John S. D. Eisenhower is a member of The American Presidents series and was published in 2008. Eisenhower graduated from West Point, served in the Army, rose to the rank of brigadier general in the Army Reserve, served as ambassador to Belgium and was a prolific author and historian. He was the son of former president Dwight Eisenhower and died in December 2013 at the age of ninety-one.

Like the previous biography from The American Presidents series I read (that one on John Tyler), Eisenhower’s treatment of his subject is brief, efficient, interesting and easy to read. At just one-hundred-forty pages in length, there are no occasions where the narrative grows stale or wanders into unnecessary detail.

Most who enjoy this biography are appreciative of its brevity, efficiency and ability to hold the reader’s interest. Those who dislike this book tend to find it superficial and rushed. Having just read Bauer’s full-scale treatment of Taylor, I confess to being thankful for Eisenhower’s economy and the relative potency of his biography.

Because most of Zachary Taylor’s personal papers were destroyed during the Civil War, biographers lack the opportunity to construct a vivid and complete portrait of this soldier-president. Nonetheless, I wish Eisenhower had afforded more time to Taylor’s earliest years. By the book’s third page, Taylor is already a twenty-three year old lieutenant in the army attempting to gain standing as a recruiting officer.

Happily, Eisenhower’s examination of Taylor’s role nearly forty years later in the Mexican-American War was more thorough and analytical. This phase of Taylor’s life, of course, plays to one of the author’s strengths (being a former army officer himself). In about thirty pages Eisenhower quickly, but not exhaustively, reviews the context of the conflict, summarizes its most consequential moments and finds Taylor at the war’s end mulling the opportunity to pursue the presidency.

Even at its best, Eisenhower’s biography of Taylor is broad but never penetratingly deep. The book’s brevity affords the author no ability to linger on any points – trivial or substantive – and the pace rarely slows for more than a moment. As a result, this is a biography that can be easily read in a day but which leaves the inquisitive reader feeling slightly unfulfilled. It is in this spirit that Eisenhower concludes the book with two parting thoughts, neither of which are sufficiently probed.

First, he suggests that if Taylor had lived to serve his full term he might have vetoed the Compromise of 1850 and, as a result, the break-up of the Union may have been prevented or delayed. This suggestion is provocatively made but not pursued at any length. Second, Eisenhower promotes Taylor as a “very capable” man who is underrated as a president due to the absence of “great events” during his time in office. This claim, too, is never provided the space it deserves.

Overall, Eisenhower provides a solid, serviceable synopsis of Zachary Taylor. This biography is not long enough to become mired in tedious details, but neither is it comprehensive enough to provide a fully satisfying experience. Ideal for a reader interested in a painless and usually interesting introduction to Zachary Taylor, this biography is insufficient for someone seeking an in-depth treatment of this former president.