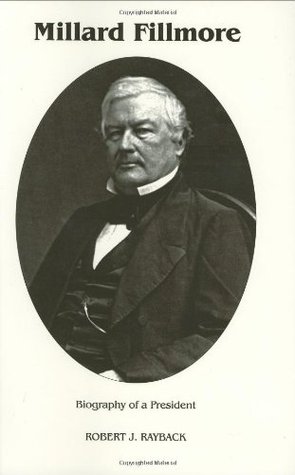 “Millard Fillmore: Biography of a President” is Robert Rayback’s 1959 biography of the thirteenth U.S. president. At the time of the book’s publication Rayback was a professor of history at Syracuse University.

Time and history have not conspired to generate an abundance of biographies of Millard Fillmore. In fact, for more than sixty years following his departure from the White House this long-neglected and relatively obscure president was viewed primarily through the pronouncements of his political rivals. Not until 1915 was the first true Fillmore biography even published.

Rayback’s contribution to Fillmore scholarship almost never happened either. This book was originally intended not as a full-fledged presidential biography but rather as an analysis of the rise and fall of the Whig political party. While conducting his research, Rayback found Fillmore surprisingly interesting and concluded that a thorough examination of his life might provide unique insight into the evolution of his political party. The result is a fairly comprehensive, and rather flattering, biography of Fillmore.

Because of its original purpose as a Whig treatise, one of its strengths is the author’s weaving together of narratives involving the Whig party’s birth and death along with the evolution of Fillmore’s political career. Owing to Fillmore’s political birth in New York, much of the book’s first half centers on New York state politics. But where the discussion of New York machine politics in Van Buren’s biographies was generally tedious and tiresome, Rayback’s description of the political battles between Fillmore and his political nemesis, Thurlow Weed, is more often fascinating.

Rayback’s portrayals of Fillmore and Weed also perfectly demonstrates the author’s obvious affinity for his subject. Despite the fact that both gentlemen were engaged in the same high-stakes game of political chess, Fillmore is always the hero…and Weed is always the villain. Fillmore would be pleased at the author’s consistent and passionate defense of his reputation and legacy, but fortunately the favoritism is easy to identify and decrypt. And rather than seeming obtusely fawning, the author’s exoneration of Fillmore often proves provocative and thought-provoking.

Like many biographies of the early and more secluded presidents, Rayback’s book focuses primarily on Fillmore’s politics and public service rather than his personal life. Though his two wives are mentioned (his first died shortly after he left the presidency) they are only perfunctorily described. Based on what is described of Fillmore’s private and family life, however, the more interesting focus may well be on his careers in law and politics.

Overall, “Millard Fillmore: Biography of a President” is a laudable and impressive analysis of an otherwise remote and little-known president. The book felt about twenty-percent too long and the narrative was not always exciting (or straightforward). But the 1840s and 1850s were a fractious and complex time in American history, and Robert Rayback’s biography proves itself a praiseworthy, well-researched and rewarding (if not always interesting) exploration of Fillmore’s life.

14 thoughts on “Review of “Millard Fillmore: Biography of a President” by Robert Rayback”