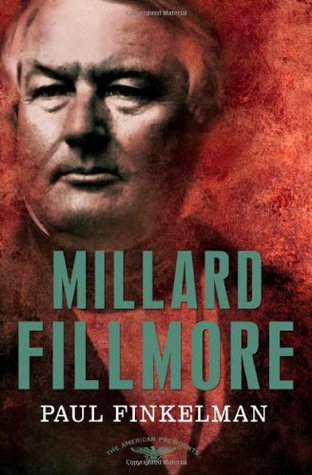 “Millard Fillmore” by Paul Finkelman was published in 2011 and is part of The American Presidents series. Finkelman is a professor of law at Albany Law School, a legal historian and prolific author. He has written dozens of books and newspaper articles on topics ranging from Thomas Jefferson to civil rights to baseball.

This being my third experience with books from The American Presidents series, I thought I knew what to expect: a short, punchy and potent analysis of a former president. But before I even finished the first chapter I was simply astonished. Never before had I read a biography of anyone where the author was so clearly and forcefully antagonistic toward his or her subject.

From the book’s outset Finkelman makes clear his utter disdain for this former president. His prose drips incessantly with vitriol and contempt. And while Fillmore was undoubtedly on the wrong side of history on a number of issues (not unlike many people of his day) this book shows little effort to objectively evaluate his legacy. At best, it reads like a scolding op-ed essay; at worst, it is a tabloid-like impeachment of a presidency – and of a man.

Most biographers tend to sympathize with their subjects; a few are unfailingly neutral. But Finkelman’s assessment of Fillmore is breathtakingly one-sided and unbalanced. Rather than making even a token effort to view the world from Fillmore’s perspective, the author fires away like a prosecutor going in for the kill. While much of his criticism is undeniably fair, the author’s credibility is strained when he is unable to find anything positive to say about this “son of a dirt farmer” who “somehow became a lawyer.”

After several chapters of this entertaining but wearisome rant I realized this is not a biography at all – it is the caricature of a warped, two-dimensional cartoon villain. And while Finkelman appropriately slams Fillmore for his support of the Fugitive Slave Act, he also criticizes him for (among many other decidedly ordinary things) trying to dress well…and joining a church!

The author can’t even quite bring himself to congratulate Fillmore for the one obvious moment in his early years as a legislator deserving of real praise: sponsoring a bill to abolish imprisonment for debtors. So it should be no surprise when Finkelman belittles Fillmore’s admission to the bar of the Supreme Court because, apparently, anyone with enough years of experience as a lawyer and the right sponsorship could have attained such a goal.

The book suffers other flaws as well. It occasionally appears hastily written and only slightly edited, as if there was a great hurry to publish a biography of Fillmore one-hundred-fifty years after the fact. In addition, some of the book is repetitious, as though the reader might miss a point if it isn’t repeated several times. Without this duplication the book would be quite a bit lighter.

Unfortunately, Finkelman seems unable to move past his grudge against the Founding Fathers and anyone else who ever tolerated slavery. His disgust is understandable, but misplaced. While Fillmore does deserve to be judged against an absolute standard of morality, he also deserves to be considered within the context of his time – but no such balance is evident. And on the basis of Finkelman’s standard, nearly every president from Washington through Buchanan should be sentenced to a celestial gulag, their legacies forever stripped of whatever good they may have performed.

The intrepid reader who is able to circumnavigate the author’s stream of venom and ignore the book’s repetitious passages will likely find something of value. Much of Finkelman’s analysis is thought-provoking and many of his points are appropriately provocative. His summary of the Compromise of 1850 and the background leading to its passage is excellent. And despite its numerous distractions, this text serves as an interesting rebuttal to Rayback’s much more generous treatment of Fillmore.

Overall, Finkelman’s analysis of Millard Fillmore is disappointing but never dull. Anyone seeking to read a biography of every president, with an emphasis on brevity, will probably find this book entirely acceptable. For a more serious scholar, this book is likely to be one of many “must reads” on Fillmore given its nuggets of wisdom. But for a reader unfamiliar with Fillmore hoping to gain deep insight into his life and presidency in a single, comprehensive biography…this is not the right place to look.

12 thoughts on “Review of “Millard Fillmore” by Paul Finkelman”